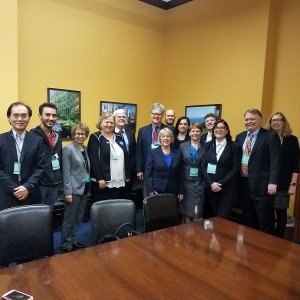 I visited Washington D.C. last week, to take part in the American Immigration Lawyer Association’s National Day of Advocacy. This is an annual event, where my lawyer organization encourages members to meet with Senators and Representatives to discuss immigration issues.

And there are issues. Many issues. Immigration continues to be headline news. Real policy and law-making requires consideration of details and implications. As far as I can tell, Congress is getting nowhere.

This is pretty much acknowledged by staffers. By now, they know the sad stories, such as the Dreamers and the emphasis on deportation. They are aware of the flawed system with H-1Bs and other worker authorizations. They know about the backlogs. Stalemate and non-cooperation leave these challenges for another day, again and again.

Our office stays in close contact with our elected officials.  Last week, my comments focused on things I’m seeing in practice lately, which might not be getting the attention they deserve. CBP officers are taking statements from applicants for admission on past marijuana use, and then barring them for life after people answer truthfully that they did, in fact, inhale. They are also doing extensive searches of people’s phones and computers, without reasonable suspicion. USCIS is issuing requests for evidence on cases without justification, at ever increasing rates. Physicians are getting caught up in the administrative dysfunction, with the suspension of premium processing and rotations turning over mid-summer. Also, the Conrad program for physicians who serve underserved communities is caught in the undertow of the more controversial EB-5 renewal. And of course, our national security has been harmed by some of the thoughtless policies that have been proposed. I also see that clients are just plain concerned.

It is a time for advocacy. I believe that America is still a nation of immigrants. America has gone through phases before. I also believe our Bill of Rights protects people from injustice, including noncitizens and immigrants. So, it’s a good idea to keep calling on our elected officials, and be engaged. That’s what we’re doing.

(Photo taken by our colleague Erin Zipfel, with Senator Murray and other colleagues)